I am a US Army UH-60 Blackhawk pilot, rank of Chief Warrant Officer 2. My wife, Shira McDonald, and I have been stationed in South Korea since October of 2015. We live in Pyeongtaek, which is about an hour and a half south of Seoul. We will be here till October 2019; our time is drawing short as I write this. We both dearly love Korea and will miss it once we return to the States.

I have been an avid bird-watcher since 2003, when I saw my first Black-necked Stilt in a farm pond in the middle of Minnesota. A bird-watcher friend was excited about the stilt and wanted to know if I’d like to see it. I went along to see what the fuss was about and got hooked as I learned the bird didn’t belong there. At the end of 2018, I was introduced to Birds Korea, a Korean NGO dedicated to the conservation of birds and their habitats in Korea and the wider Yellow Sea eco-region. I had been logging my bird observations into eBird, an online database of bird records worldwide through Cornell University, when Dr. Nial Moores (co-founder of Birds Korea) contacted me regarding an observation of Ruddy Shelducks. After a few back-and-forth emails I offered to volunteer. Nial requested that I bird the Hwaseong Wetlands as frequently as I could and report to him the counts and species I saw.

This year I’ve spent birding the wetlands as much as I can. There are many species of shorebirds that use the area as a stopover along the East Asian-Australasian Flyway. Birds Korea is interested in all birds in this area but really focuses on 16 key species because of their conservation status: the Black-faced Spoonbill, Chinese Egret, Oriental Stork, Hooded Crane, Far Eastern Curlew, Great Knot, Saunders’s Gull, Far Eastern Oystercatcher, Grey Plover (Black-bellied Plover), Mongolian Plover (Lesser Sandplover), Eurasian Curlew, Bar-tailed Godwit, Terek Sandpiper, Common Greenshank, Dunlin, and Nordmann’s Greenshank. I’ve seen all except for the Hooded Crane in the wetlands. The maximum count I had of the Black-faced Spoonbill occurred just a few weeks ago, at 114 birds.

While birding in the Hwaseong Wetlands, I met many great people. I routinely saw local people pull up and either photograph or watch the birds. Despite my limited Korean, we could still have a brief conversation about what we were seeing. The main bird book I use is published in Korean and English, so it has been very handy to open the same book the locals use and point at the birds seen. Another good way to strike up a conversation has been to put a scope on a unique bird and wave people over. It has always a good bonding experience with new people — I believe the Koreans were excited to see a foreigner appreciating the natural beauty Korea has to offer.

Shira became interested in birding through me. She enjoys going out and watching birds do bird things: foraging, feeding, singing … seeing birds be birds. She has joined me a handful of times at Hwaseong. One afternoon we spent watching a family of Great Crested Grebes; two adults were taking care of three juveniles. We’d watch as one adult dove down and returned with a small fish, feeding it directly to one of the young. Sometimes the juvenile would successfully take the fish, other times the fish would be dropped and the adult would go after it, again. It’s impossible not to find it adorable when a juvenile hops up on the back of an adult and relaxes there for a while.

When Shira and I move back to the States, we will be stationed in Alabama, where I will be an instructor at the Warrant Officer Academy. I have started reaching out to conservation groups there so that I can volunteer and contribute to conservation efforts along the Mississippi Flyway.

Note: SAVE members Randy Hester, Marcia McNally, and Wan-chih Yin met Jared and Shira in May, when they presented the UC Berkeley/SAVE plan for Hwaseong Wetlands at the international symposium, “Designing for Hope: Planning for the Future of the Hwaseong Wetlands and Hwaseong City”.

The following images are courtesy of Jared Busen, used with permission.
Click on an image to see it at higher resolution. 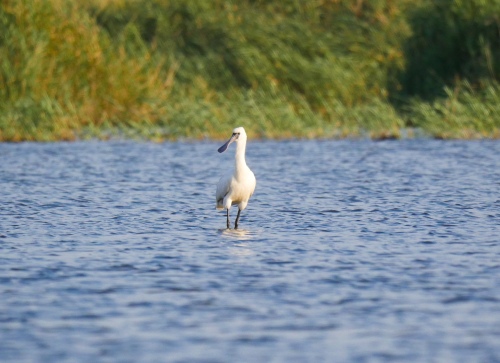 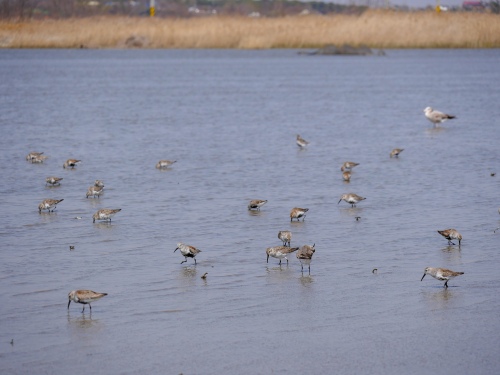 Dunlins and a Black-tailed Gull

This entry was posted in Uncategorized. Bookmark the permalink.

One response to “News from Hwaseong Wetlands”